You thought I could not find an Italian word with a Q.
Well besides who, what, this and that, I could not…

But a quick email call to my resident Italiana American authority, Sig Ferrara,  it was suggested I use Quotidiana…..

Giornale is also used for newspaper……but I do like this new word, much more forceful. 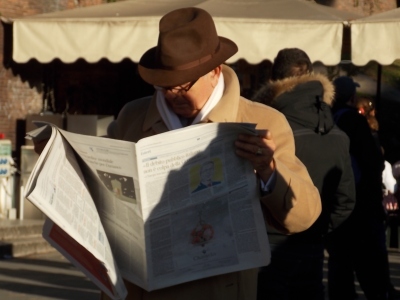 And you do see Italians reading the daily paper.   I read that on the way to the bar for una café and cornetto (breakfast) they will stop at their local vendor for the paper.

The man above was in front of the metro stop at the Colosseum in Rome.   The tourists were looking at the Colosseum and trying not to be run over while they crossed the street, but the newspaper captured this Romans full attention.

The newspaper stand is found in all the towns I have visited, some are larger than others, some carry other items. But each of them has a wide assortment of newspapers, all with the heading for the day displayed.

Since newsstands will also sell bus tickets the ones in train stations are usually large.  In Firenze there were several stands, In Venice and Bologna they also sold maps of the city. Avoid the one in Como, a very angry woman works there, while the lady in Spoleto gave me a free basic map to the city so that I walked in the correct direction.

Refreshing to see a country where news is still printed and not absorbed by an electronic device.

Where have you found news stands in Italy?

One thought on “Q: Quotidiani: my daily newspaper”