If you are traveling in Italy, consider attending the Venice Regata
Our new FB friend Daniela at  www.Joyfulit.it , a language school close to Venice,  told me about this event.    Why am I never in Italy for all the great festivals? 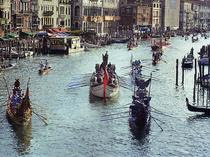 Regata Storica. The Regata Storica (Historical Regatta), Venice’s most exciting gondola race, sees teams of gondoliers – some decked out in costume – racing a course along the Grand Canal. Accompanied with food, music, and much fanfare, the Regata Storica is a fun event to catch if you’re visiting Venice in September.   For more information, visit the Regata Storica website.

The months-long contemporary arts extravaganza that is the Venice Biennale begins in June every other year during odd-numbered years and runs through November. Read more about the Venice Biennale.
September 14 – Festival of the Triumph of the Cross. This holy day is marked with a procession at the church and grand school (Scuola Grande) of San Giovanni Evangelista in the Sestiere di San Polo. above from:  http://goitaly.about.com/od/venice-events/a/venice-september.htm  Venice Historical Regatta also known as the Regata Storica

Dating back to the second half of the 13th Century, the Venice Historical Regatta is a spectacular competition whose origins are firmly entrenched in the history of Venice. As the maritime nation considered it vital to have expert oarsmen.

The Venice historical regatta, is the main regatta of the year. Although the other islands and communities of the Venetian lagoon also hold their own regatta’s throughout the calendar year.
The Regatta storica takes place on the first Sunday of September in Venice.

The historical regatta takes place on the Sunday afternoon. It begins with a ceremonial parade along the Grand Canal of historical boats manned by Venetians in period costume. The most important rowing races are between the various neighborhoods of Venice.

Like the celebrated Palio of Sienna, the fans and followers of each neighborhood boat and crew are a form of entertainment in themselves. In fact, in ancient times, a fleet of bissone (typical long boats) would proceed the race clearing the way and maintaining order.

The traditional points of reference for the Venice historical regata are the spagheto, a rope stretched across the starting point in front of the public gardens in the Castello sestiere of Venice;
the Paleto, a pole driven into the center of the Grand Canal in front of the Church of Sant’Andrea de la Zirada, around which the boats must turn before going back up the Grand Canal to cross the finish line.

The finish line is indicated by the Machina, a construction erected on a wooden raft richly carved, painted and gilded, and where the prize-giving ceremony is held.

The historical regatta of Venice, re-enacted on an annual basis nowadays also recalls the famous procession of the 16th Century when Caterina Cornaro, a native Venetian who was later crowned Queen of Cyprus returned to Venice to deliver the island of Cyprus into the hands of the Venetians.

Following this procession come the bisonni ( 8 oared Gondolas), then, the balotine ( 6-oared Gondolas ), the decorative and ceremonial gondolas of the various rowing clubs.

Then, the competition starts with a regatta for youngsters, followed by one for the women, and then finally one for the two-oared gondolas that are numbered and colored differently.

Once the Regatta is finished, the canals of Venice come to life with boats of various sizes, full of people celebrating amongst all the noise and confusion. Other events, such as street-entertainers and other artists, take place in the principal square’s of Venice.
http://www.tours-italy.com/venice-about-regatta.htm
There are many more great details on Daniela’s links below.
She has done extensive research on this event.    To see this pageant   up close would you hire a gondolier for the day?  Row out to the main canal and be part of the event?
Only the Italians know how to put on  such an event of this scale……

info credits are below each section.