This is a great story from out new friend, Daniela, the owner of the language school Joyfulit.it  located outside of Venice.   see the link below for the great programs she offers.

This photo brought back the memory of my last visit toVenice…..   I stayed at a convent near  St Marks square that was a grammar school during the day!   See the listing at www http://www.monasterystays.com/ Daniela shared some interesting facts that I did not know and can make your visit to Venice so richer….

“A few small curiosities before leaving the beautiful St. Mark’s Square. If you manage to stop for a little while in the middle of the flow of people, look at the two pink columns among the other white columns in the upper arcades of the Doge’s Palace.

It is said that the doge was standing between the two columns during official ceremonies and that he pronounced death sentences from there (the pink color is a reminder of the red blood color).

Just a little further away there are two black street lamps that in the past were always alight. They were positioned there in order to remind an error that the Venetian Republic made in the administration of Justice and that was recognized as such.  Here goes the story: the baker Piero Tasca was going to work one morning when he noticed something shiny at the edge of the street: he knelt down to pick it up and realized that it was a dagger and that a corpse of a man was lying not far away from it. The baker was seen with the dagger in his hand and that was his condemnation: on March 22, 1507, he was executed, but soon after his death the true murderer was caught.          The spot where the executions were carried out is located between the two columns which face the lagoon towards St. George’s island: here criminals were killed and hung by their feet.The two columns are made from two blocks of granite brought from the Orient in the XII century. They have been a symbol of the city for almost one thousand years. At the top of one column there is the statue of Todaro (Saint Theodorus) which is made up of parts of various origins and time periods:   the head is Greek, the chest and the shoulders are Roman, while the rest of the statue dates back to the XV century.    On top of the other column you find the famous Lion of St. Mark, most probably a Chinese art Chimera with the addition of wings. As this was the place where executions took place, even today in Venice when somebody says “to find oneself between Marco and Todaro” means “to be really in big trouble”.

Walking from the columns towards the public gardens, you pass by the Zecca Palace (the palace of the mint) that was moved here in 1277 so that it could be more easily controlled by the highest Venetian authorities.  Among the numerous minted coins one was called “zecchino” which was made of such pure gold that even today in Italian we use the expression “oro zecchino” to indicate the purest gold.     In case you feel like getting a drink that is just as memorable as the exceptional places you have been visiting so far, do not miss the classic Bellini cocktail at Harry’s Bar. The delicious combination of fresh white peach juice and Prosecco wine, and the unbeatable kindness of the waiters of this bar, are an experience worth making: if you are lucky, you might even meet the owner, Arrigo Cipriani, a delightful person, always available to have a chat with those who would like to meet him and spend some time with him.      This could be a good chance to hear legendary stories regarding this historical place and about famous people who were regular guests here, first of them all Ernest Hemingway. written by http://www.joyfulit.it/2011/05/venice-st-marks-

I looked at my personal photo of the Doges Palace and could not find the columns but I will be looking for them on my next visit! 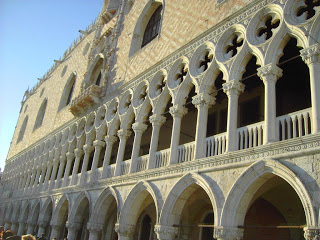