I often write about people I meet in Italy and many times I am ‘introduced’ to them online or via an article they publish.

Last week while reading one such article in Italy Magazine I found Myra Robinson.

Myra Robinson is an expat from the United Kingdom living in the area outside of Venice.

What caught my attention, as I read her article was how the author described her interaction with the Italian families she now lives among.

A Magical Outdoor Theatre in the Euganean Hills

It’s an enormous privilege to live in an Italian village where you’re taken under the wings of the
locals and included in all the events each year.
A good friend and neighbor calls round to tell me there’s to be an evening concert after a
wine tasting on Monte Venda, the highest hill in the Colli Euganei. It certainly pays to know
people. I hadn’t seen it advertised at all, yet when we get there, a lot of people are expected.

They’d arranged for young men in high visibility waistcoats to direct the cars to parking spaces.
We park on one side of the narrow road, leaving barely enough space for other cars to pass, and
scramble up the dusty path, higher and higher until we reach a small level field where there are
three tents.

Buying a pink raffle ticket entitles you to several drinks, a cold pasta dish, panini con porchetta
and slices of melon, with the concert to follow. And who should be dishing out the food but my
friend from the corner bar. It’s certainly a small world in the Euganean Hills.

“Salve, signora,” he says. “Pleased to see you here for the first time. Have a piece of cheese.”
He waves a fork at me with a huge lump of Grana Padano on it. I accept, and look around to see
where my friend has got to. She waves from the hillside, and when I get nearer I see that she’s
spread out a picnic blanket on the side of a large natural amphitheatre with a wooden stage in front.
Musicians are tuning up and dusk is falling. The view behind them is stunning. Across the foothills,
the land slowly flattens into a plain where lights are beginning to twinkle. Beyond is the Venetian
Lagoon, with a hazy glowing suggestion of La Serenissima (Venice) in the distance. 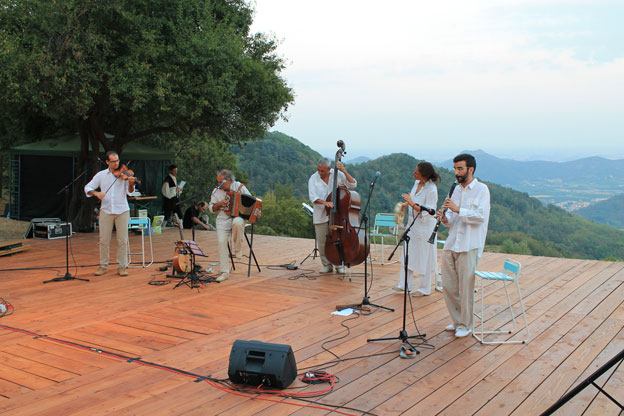 The spotlights are switched on and a middle aged portly man in a linen suit steps forward to the
microphone. I groan inwardly, hoping it isn’t going to be another example of the “due parole”
(two words) which go on for twenty minutes. The speaker turns out to be the owner of the hillside,
a wine producer who decided that rather than make a vineyard from this natural amphitheatre,
he’d turn it into an outdoor theatre and put on performances all summer.

With a wave of his hand, we are introduced to the Orchestra Popolare delle Dolomiti in Concerto.

They play traditional music, very jolly and on a host of unusual instruments: I count 20 at least.
I’m impressed that they’ve even hauled a harmonium up the steep rocky track, as well as a double
bass. A female singer adds to the occasion, urging us to clap in time, or sing choruses, but as it’s
almost entirely in dialect I have very little idea of what the songs are about.
At some point in the evening, I become aware of a slight humming noise and lights overhead.    A
plane is on its descent into Venice airport, very close to us in the night sky because we’re so high
in the hills. I wonder what the passengers will make of the sight below them; a stage and orchestra
bathed in an orange glow, and clusters of faces on the hillside caught in the light. I can even make
out faces of passengers in the plane’s windows, but to my surprise, nobody on the ground around
me seems to notice, so intent are they on listening and enjoying the music.
The next day, I’m introduced to Signor Zanovello, the owner of the land, whose idea it was to turn
it into an outdoor theatre, inspired, he said, by a visit to the Greek theatre of Segesta in Sicily. We
sit down to chat in his cantina, Ca’ Lustra, over a glass or two of his prize-winning wine. He’s a
softly spoken, gentle man with astonishingly blue eyes, not at all the go-getting entrepreneur I’d
imagined, but he certainly has a passion for the hills and local culture.

His story is fascinating. It was so important to him to create the perfect outdoor theatre that he
called in geologists to advise about the stability of the land, disappointed when they rejected his
magical idea of adding a little lake, but nevertheless spending a fortune on earth-moving.
Next, he collected wooden floorboards from an old factory which was closing down, and created
the stage, knowing that the wood was already old and well seasoned, so it wouldn’t warp.
Even when he complains about the damage done by the thousands of wild boar which live in the
hills, he remains serene, calmly trotting out the amazing statistics which cost the regional park
€100,000 a year in lost produce and repairs to paths and woodland. Like other hill farmers I’ve met,
he seems to accept the interconnection between the land and the flora and fauna, and doesn’t care
much for the vast profits some greedy landowners strive to achieve. 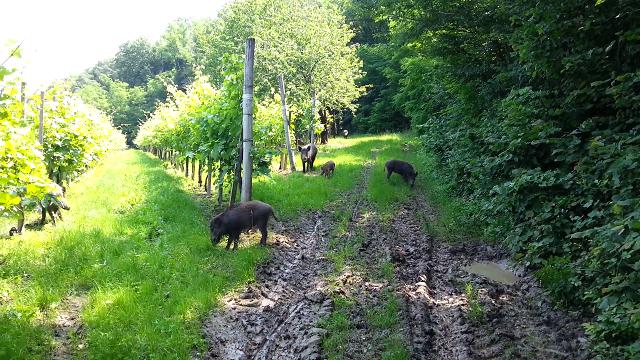 I find it almost incredible to hear that there are about 10,000 wild boars in the Euganean Hills,
especially since I’ve only ever seen one in the flesh. Equally amazing is their rate of reproduction,
so fast that even the most determined hunting can’t keep the numbers under control. Each sow
bears two litters of 12 piglets every year. To make matters worse, a decade or so ago they
imported a Hungarian strain of wild boar, heavier, larger and more cunning than the natives, to satisfy
demand from huntsmen.
It’s a never-ending labour of love. As well as constant maintenance, there are plans to build
covered areas for public use and to extend the programme to “at least 20 different kinds of cultural
experience.

” Signor Zanovello sums it up very well with his mantra: everything must be “bello, buono,
e di qualità”.

Myra Robinson’s teaching career has ranged from teaching French in Wales, to her specialism, children with behaviour problems, eventually becoming a head teacher. (And for that, she says, you need a good sense of humour and the ability not to take yourself too seriously.) She was awarded a Churchill Fellowship to examine working with disaffected young people throughout Europe.

With a passion for travel, languages and the arts, she has published many articles, mainly on travel and education, (Daily Telegraph, Independent, Times Educational Supplement, etc.), and is a regular contributor to Italy Magazine.
After a life-long obsession visiting spa towns, she discovered Montebello, (its fictional name), a faded backwater once renowned as having the best mud in Italy, the focus of her first book, Fried Flowers and Fango.
She began learning Italian because the place intrigued her, and she ended up buying an apartment, feeling driven to write an account of life there. With an acutely observant eye, she enjoys its humour and quirkiness, and has become part of the community. Her latest project is to arrange twinning between the Museum of Navigation and two canal museums in England.
Myra now divides her time between Newcastle upon Tyne and Battaglia Terme. She sits as a magistrate, occasionally advises on education, and continues to write, notably in Italy Magazine .