I first heard about this tradition in Puglia, Italy.  Yle with Yltour.com  www.yltourcongressi.com   arranged for me to learn to make pasta with una nonna, (a grandmother) at her home one morning.

While she was correcting my ‘lack of skill” on the 4th type we were making, her grand daughter Debora (my translator) explained that on St. Josephs’ day March 19,  all the families in the village would spend days making pasta.  So much pasta that they had to use the beds in the house to lay it out to dry!

Easter Traditions:
I expected to hear about the pre easter processions when I asked Yle Sambati about Easter in Lecce.     I was surprised when she mentioned san Giovani tavola as the most unusual event in Puglia.
I had never heard of it and after a quick search on line, remembered  Nonna Vata’s story.

What is St. Joseph’s Table?

Growing up in  New Jersey I never heard of it.  But I recently saw it mentioned in several Italian American newspapers and even The Sons Of Italy magazine.     As I asked my Italian contacts about SGT, they replied they never heard of it or didn’t practice the tradition.

Did your family observe St Joseph’s day?   Did your Italian village follow any of the rituals that were explained to me?  Keep reading….  what USA holiday does it remind you of?

Gathered from many sources I have pieced together what I think the tradition entails and how some towns and villages practice the ‘gift of sharing’.  Much is lost in the translation but share with me if you have more information…  With the help of Yle, Debora and Google I have an idea of  how St. Josephs’ day is celebrated.

Tavole di San Giuseppe, St Joseph’s day March 19.
Debora explained:  “It’s a very old tradition, coming from the pagans and transformed to a christian/religious moment for the village.”
Just in few villages of the province of Lecce, the tradition is still going on … “and my village is one of them”.    Uggiano la Chiesa  and Giuggianello (10 km away) are 2 of the villages on the ‘olive oil and bread’ trail….   the additional towns listed by Wikipedia that continue this custom are:   Cerfignao, Cocumola, Minervino di Lecce, Sasamassella, Otranto as well as others.
“Families start to prepare the “puccia“, a small round bread that they prepare and cook (bake)  in a huge quantity and go around the village, to offer a “puccia” to every relative, friends and people…. it’s a kind of “gentle act” to give something to eat to everybody (who) needs it and to show to the Saint the “good attitude” of the family.”  (see the photo with a basket of bread on the floor)

In Giuggianello, a residents says “the tradition is that few of the old women from the village start to prepare a lot of food from prior to the special day, March 19.  There is a huge table prepared in the main square of the village and everyone is invited to take a dish, bread and whatever they want.  It is like a huge banquet”. 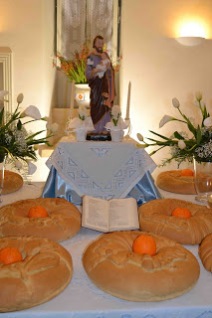 The Oil Lights:
You can see the bread but also the small typical “light” that families still use (to remember) their dead relatives and saints in the house.       It’s a special light made with water, olive oil and a special flower that can “burn” the oil, producing the light:  http://officinaverde.altervista.org/botanica/index2.php?nome=lumino_greco
: On the top of the big round bread, you can see a small ball of bread : this is a PUCCIA di San Giuseppe

Debora sent me an email that they received a Puccia today from another family from the village and ‘it will go like that for the next weeks,  too much bread”

There is so much more to tell I shall need another post!   See the story of Easter 2012 at  bit.ly/Yeb6y0